Honda Cadet: Ellis Bell
Ellis had a phenomenal weekend! The privateer driver only going forward all weekend. After starting the weekend qualifying in 20th. Ellis bounced back gaining ten positions in the first heat and four in the second. This put Ellis near the sharp end for the pre-final where he gained another three places, meaning he would be starting in the top ten for the final. After 13 minutes of racing and a red flag seeing an end to the race, Ellis finishes with a career best 4th place!

Mini Max : William Murtagh
Murtagh’s weekend was one that most drivers have probably been through, with a solid qualifying the young driver had a great start to the weekend. Troubles in the first heat sees him drop down to 5th only to have an amazing come back in heat two finishing first on the road. With Murtagh taking maximum points going into the pre-final, it was all to play for. Finishing a very impressive 2nd by just 0.220 of a second, but a tough race in the final sees Murtagh finish fourth just off the podium. After having to make the switch to MiniMax this season a podium is in sight for the young driver.

Junior Rotax: Gustav Usakovs
With a staggering 55 driver entries for the third round of the Rotax championship, it was going to be a tough weekend for all the drivers. But one stood out! With Usakovs not only taking his first podium in the British Kart Championships but also scoring maximum points in the heats and pre-final seeing his best ever performance at the Warden Law circuit.

Senior Rotax: Archie Walker
Walker’s weekend was looking to be the best of the season. Having tremendous heats finishing 2nd in both heat one and two, disaster would strike in the pre-final seeing Walker retire with mechanical issues. It was all down to the final, with Walker starting in 29th place he would show the world a masterclass of a drive to gain a staggering 21 places to finish 8th in the final. With Walker only 14th in the championship standings he most certainly drove like a champion. 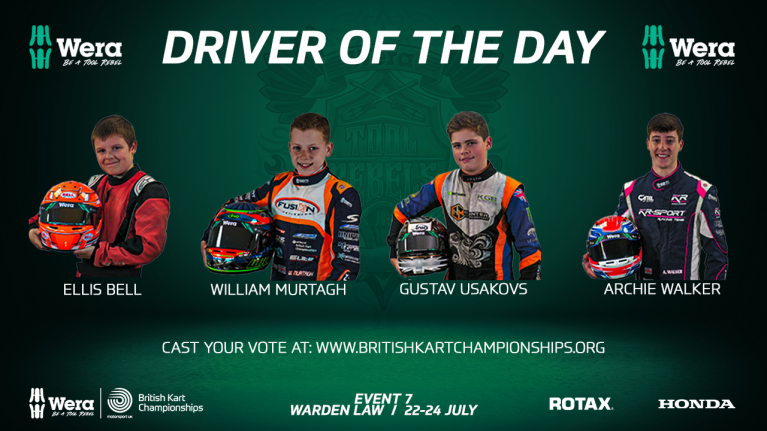 The competition closes at 7pm on Thursday 28th July