The Wera Tools Driver of the Day Award shortlist is now LIVE for Event 10 Kimbolton.

Honda Cadet: Charlie Woolfit
Only 15th in qualifying but took two top tens in the heats and the pre final . Almost won the final and ended up 3rd for his first podium

Mini Max: Harrison Whitticombe
Recovered from wrong tyre choice in qualifying to finish 8th and 3rd in heats and then fifth in pre final. Went from 5th to 3rd in the final

Junior Rotax: Olly Stevens
Only 35th in qualifying but gained places in his heats and then went from 22nd to 12th in pre final and finished 6th in final as a privateer

Senior Rotax: Callum Bradshaw
Has been nominated before but we have a rule between us that if a driver takes a clean sweep of qualifying, heats, pre final and final they are automatically nominated as you can’t do better than that. Another perfect weekend

KZ2: James Glenister
Had food poisoning on Saturday and qualified eighth. Then won both heats and the final to take the title fight down to the last race 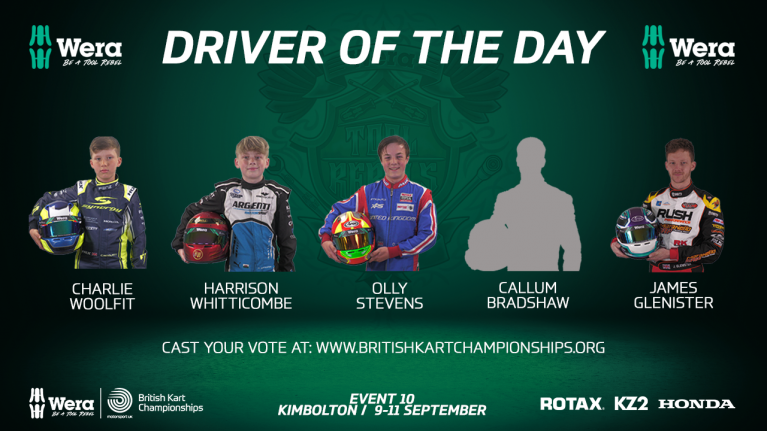 The competition closes at 7pm on Thursday 15th September