Motorsport UK are delighted to announce the eagerly-awaited details of the British Open Championships which include the Honda Cadet Cup and O Plate meetings and a new format launched in 2022. 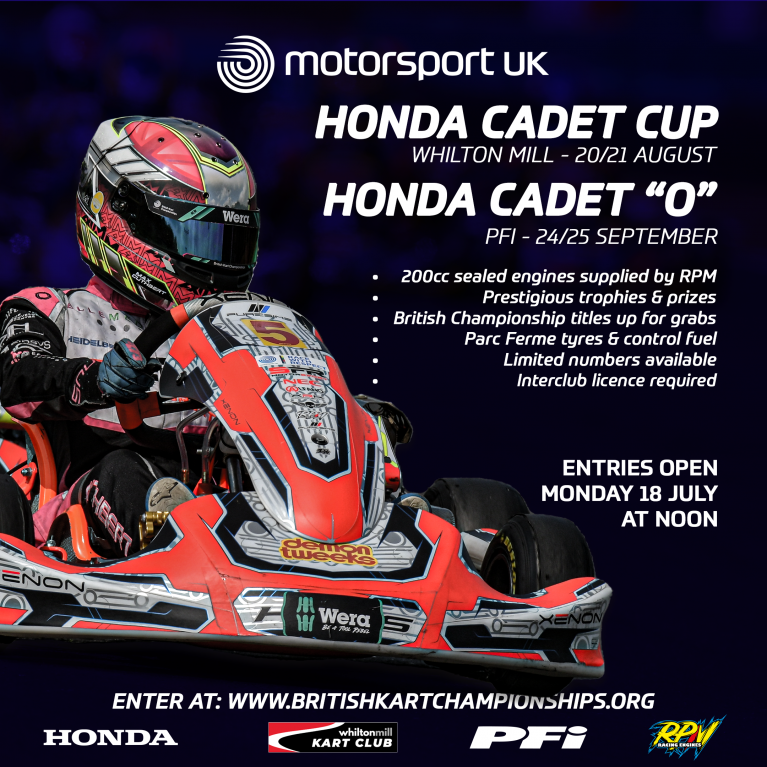 The prestigious events will be organised and promoted by the British Kart Championships team, and for the first time will run alongside Britain’s premier karting series. The British Open Championship events will run across two weekends, with the Honda Cadet Cup joining the BKC at Whilton Mill on 20/21 August, whilst the “O Plate” title will take place at PF International on 24/25 September.

Following the success of last year’s event, both meetings will employ an academy-style format, suppling entrants with sealed Honda GX200 engines distributed by RPM Racing Engines for all on-track action.

Each powerplant will be checked and dyno-tested to ensure that all units will be within a 0.1HP tolerance, promoting a level playing field and exciting racing with engines being drawn at random for each driver.

The entry fee for the events has been set at a competitive rate of £275.00 for the weekend which includes all race fees and engine hire. The format promotes limits on new tyre usage and also the ability to carry wets over should they not be used to ensure a cost-effective offering.

Dan Parker, Motorsport UK Karting Manager commented “Motorsport UK are delighted to build on the success of last year’s O plate event which was really well received by competitors and teams alike. We have always been eager to explore the possibility of academy-style racing where equal equipment and cost-effective racing is available for everyone.”

“The Honda Cadet British Open Championship and Honda Cadet Cup are an ideal platform for us to offer drivers the chance to compete for these prestigious titles in a class that has seen many of today’s top drivers begin their careers. Stars such as Lando Noris, Alex Albon, Daniel Ticktum, Jessica Hawkins and current Formula 3 driver Oliver Bearman have all raced in the Honda Cadet class during their careers and this further enhances the wide range of karting opportunities that Motorsport UK can offer talented youngsters on their chosen path in the sport.”

Entries for both events are limited and are open to drivers currently competing in the Cadet class and hold a minimum of a Kart Interclub license in order to compete.