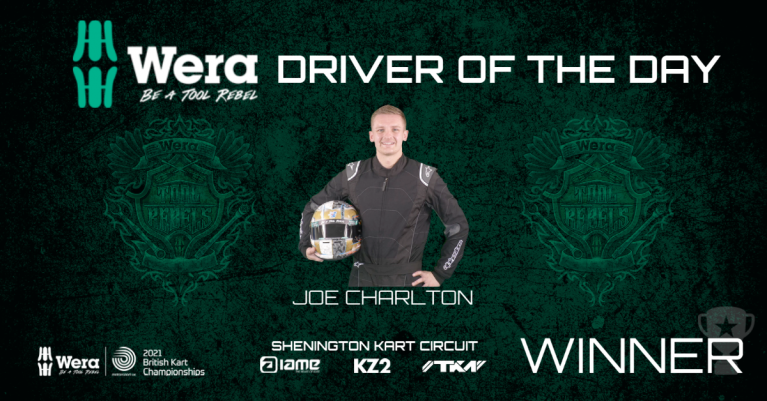 Charlton was nominated by the panel of judges along with a shortlist of five other drivers thanks to their on-track performance, sporting act or overcoming adversity. Each driver was in line to scoop a special Wera Tools Trophy and a comprehensive Wera Tools kart toolkit worth £2,500, whilst Motorsport UK will supplement the prize with a free test day at a BKC venue of their choice in 2021 or 2022.

Charlton received his nomination thanks to his ability to overcome a series of challenges over the course of the weekend, which saw the reigning champion suffer clutch failure in the heats and then an engine failure ahead of the final. Stellar work by Charlton and his mechanic saw him rebuilt the offending article to start the final last on the grid. A masterclass performance saw him vault to second place by the time the flag dropped – his performance worthy of a nomination by the panel of judges. The public vote would then go in his favour and Charlton was understandably happy with the outcome.

“‘I’m really happy to be recognised as driver of the day after everyone short listed had put in such strong drives” he said.

“Thank you to everyone who voted for me. I’d like to thank Ian Thomson my mechanic, AF Racing for the engine support And Energy Corse Karts for the chassis. ‘

The award continues at the next meeting of 2021 which heads to Kimbolton on 12-13 June.