IAME Cadet contender Jesse Phillips has been named as the Wera Tools Driver of the Day for the Kimbolton meeting of the Wera Tools British Kart Championships (12-13 June). 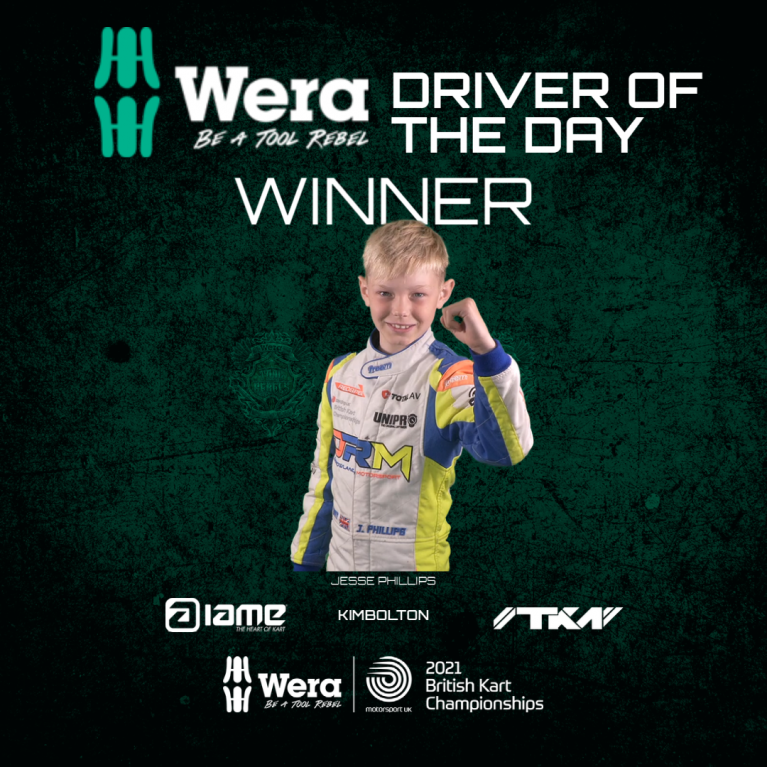 Phillips was nominated by the panel of judges along with a shortlist of five other drivers thanks to their on-track performance, sporting act or overcoming adversity. Each driver was in line to scoop a special Wera Tools Trophy and a comprehensive Wera Tools kart toolkit worth £2,500, whilst Motorsport UK will supplement the prize with a free test day at a BKC venue of their choice in 2021 or 2022.

The nine-year old racer received his nomination after a career-best result at the Cambridgeshire circuit, coupled with a very mature drive which involved plenty of clean overtaking maneuvers.

Phillips would also recover from a confidence-zapping opening round which saw an on-track incident and Finals spin to finish down the order in 24th. His performance at Kimbolton netted him a nomination with the public vote scooping him the award.

“I’m really happy to get the award” he said.

“I`ve worked really hard over the last two weeks and being voted made it all worth it. But to win is a great confidence boost and thank you to everyone who voted for me”.

The award continues at the next meeting of 2021 which heads to Mansell Raceway on 26-27 June.