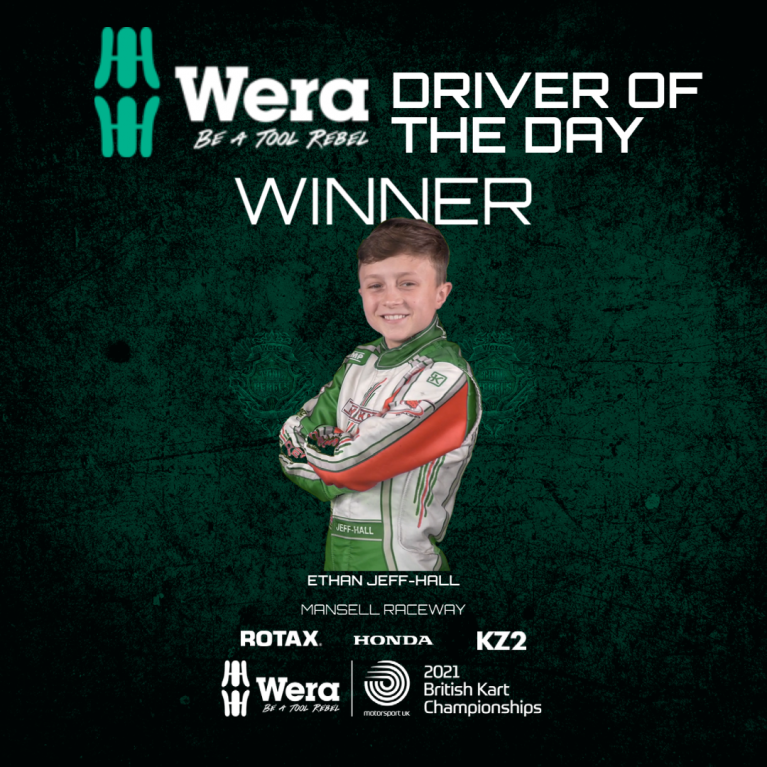 Mini Max front-runner Ethan Jeff-Hall has been named as the Wera Tools Driver of the Day at last weekend’s Mansell Raceway meeting in Devon (26/27 June).

Jeff Hall was nominated by the panel of judges along with a shortlist of five other drivers thanks to their on-track performance, sporting act or overcoming adversity. Each driver was in line to scoop a special Wera Tools Trophy and a comprehensive Wera Tools kart toolkit worth £2,500, whilst Motorsport UK will supplement the prize with a free test day at a BKC venue of their choice in 2021 or 2022.

The 12-year old Strawberry Racing driver received his nomination after another dominant performance in the category, taking pole position in qualifying, winning heats one and two, the pre final by over three seconds and taking the finals win to lead the series by 17 points heading into the third round.

“I am honoured and proud to have been voted as the Driver of the Day from the Mansell round of the Wera Tools British Kart Championships, especially considering there are so many talented drivers in the championships this year” he said.

“Thank you so much to everybody who has voted for me – it’s a great reward for all the hard work! Thank you also to my team – Strawberry Racing, Warwick Ringham, my mechanic – Lee Taylor and my family. I am really enjoying taking part in the championships and I am looking forward to the rest of the season!”

The award continues to be up for grabs throughout the season and the next round sees the series head to Larkhall in Scotland on 17-18 July).