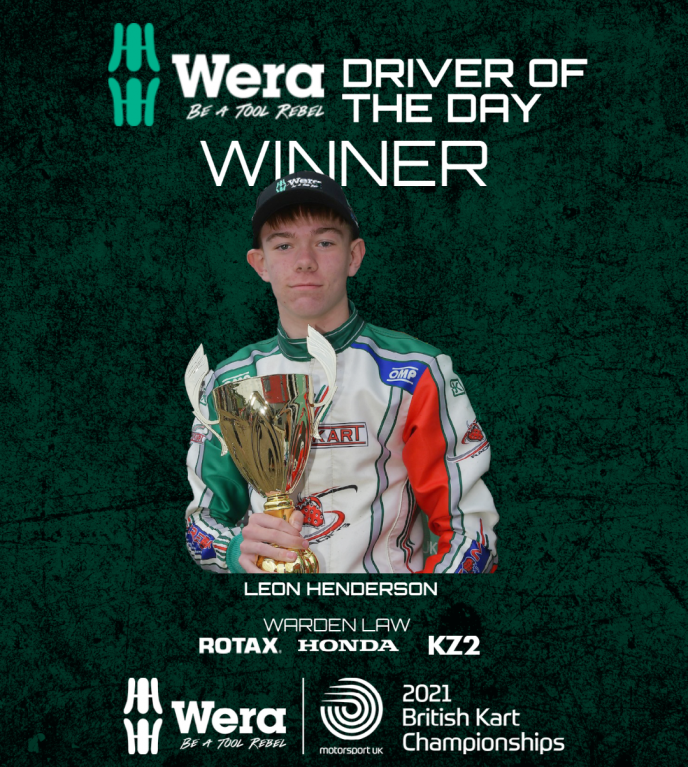 Henderson was nominated by the panel of judges along with a shortlist of five other drivers thanks to their on-track performance, sporting act or overcoming adversity. Each driver was in line to scoop a special Wera Tools Trophy and a comprehensive Wera Tools kart toolkit worth £2,500, whilst Motorsport UK will supplement the prize with a free test day at a BKC venue of their choice in 2021 or 2022.

The Strawberry Racing driver won both heats at Warden Law, backed up by 3rd in the pre-final and subsequently went on to take his maiden final win.

“I could not race at the front without the support of Strawberry racing. Warwick and all the rest of team keep pushing me on and I never thought I could achieve what I have. Living in Aberdeen means a lot of travelling and my family have supported me since I started , being nominated was a really big deal for them as well.”
“I would like to also thank my sponsors, Rollstud who have supported me since I started karting, Moates Offshore and Katoni Engineering are all local companies within Aberdeen without them we couldn’t go racing. And A massive thank you to Wera Tools for running such a great championship , the prize will come in handy for my Dad as he gets a lot of stick from the team about his tools.”

“I am looking forward to the final round at PFI, any one of the top 10 can win it so it should be exciting race to end the championship.”

The award continues to be up for grabs throughout the season with the next round heading to the popular PFi Circuit in October.