The coveted event would see a scintillating performance by BKC drivers, with three Team UK members becoming Grand Final Champions and six others earning podium finishes. Team UK would also claim a dominant Nations Cup victory ahead of 59 other nations, claiming the first ever podium clean sweep in the 23 year history of the Grand Finals.

Having earned their tickets to race through the Motorsport UK British Kart Championships, the Rotax Grand Festival, the Rotax Euro Trophy and the BNL Karting Series, 18 drivers represented Team UK among the 394 strong entry. Using identical karts and engines which each driver selected at random, the Rotax Grand Finals is regarded as the truest test of a drivers skill in the karting world, making Team UK’s achievements even more remarkable.

Leading the way was BKC veteran Mark Kimber, who became the first driver in Grand Finals history to win three different classes as he dominated the fearsome DD2 class. 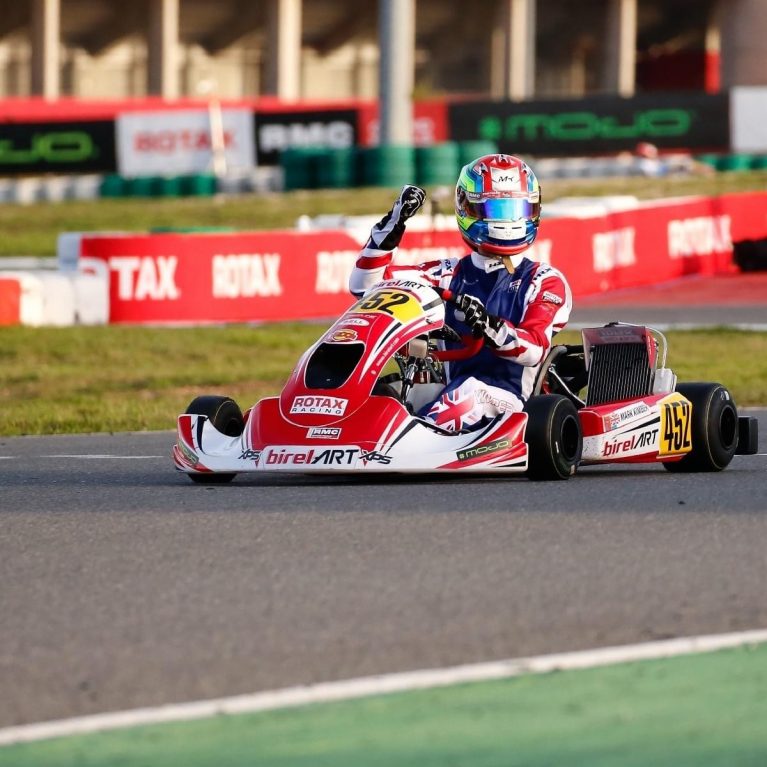 Capping off a remarkable rookie DD2 season in the fastest Rotax category, Kimber qualified second fastest and then won all three of his heat races and the pre-final before leading the 21-lap final from start to finish to add the 2022 title to his 2016 Junior Rotax crown and his 2021 Senior Max victory.

In Junior Max, it was Scott Marsh who stood on the top step of the podium for the National Anthem, emerging at the head of a fierce early race scrap that saw his fellow Team UK drivers Vinnie Phillips and Ethan Jeff-Hall take turns in the lead, with Charlie Hart also in the mix.

2022 BKC runner up Phillips took outright pole position and won the first of six heat races, but Marsh timed his attack perfectly at the half way mark of the 18-lap final to snatch the lead and sail away to an emotional victory. 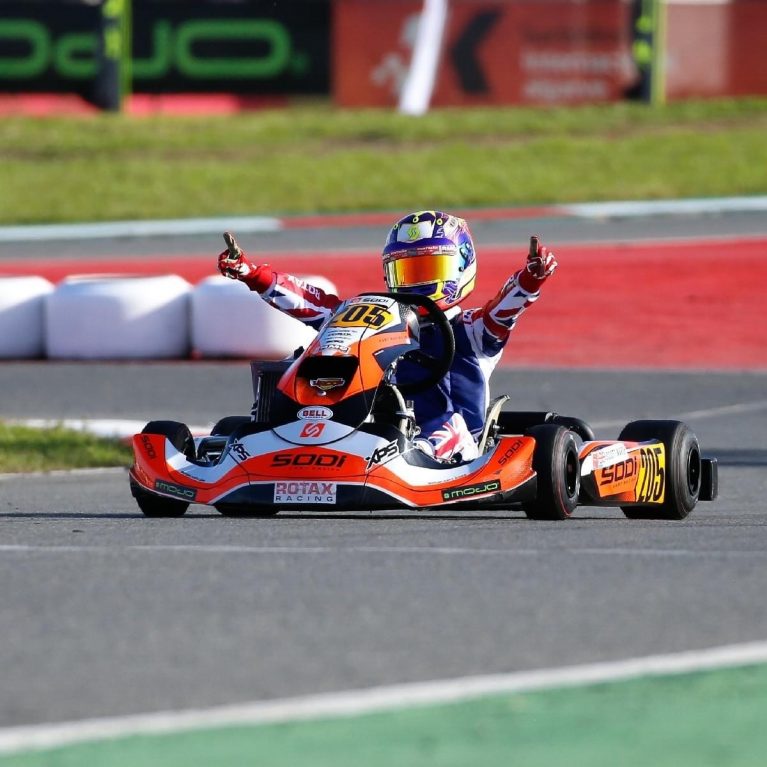 Former Motorsport UK BKC Mini Max Champion Jeff-Hall emerged at the head of the chasing pack following a lengthy duel with Team Netherlands Kasper Schormans to complete a Team UK 1-2 with Phillips crossing the line in fifth and Hart 20th following a nosecone penalty. British Kart Championship Mini Max Champion Noah Wolfe missed out on a place in the final by a single spot after an accident in one of his heats and a last lap issue in his pre-final.

Bradshaw was one of five Team UK drivers in the Senior Max class alongside Sean Butcher, Kai Hunter, Lewis Gilbert and Motorsport UK British Kart Championship Junior Max Champion Brandon Carr and they provided proof beyond doubt that the BKC grid is the strongest national Rotax championship in the world.

Hunter led from the start and swapped top spot with Bradshaw several times with Gilbert, Carr and a fast-rising Butcher soon making it a Team UK 1-2-3-4-5.

After a lively race, it was the 2020 CIK-FIA World Champion Bradshaw who stepped onto the top step of the podium followed by Gilbert and Carr for the first ever clean sweep by a single nation in the history of the Grand Finals. Hunter and Butcher were eventually classified 11th and 12th.

Team UK were also represented in two other classes, Micro Max and Mini Max where there were no less than three podium finishes to bring Team UK’s total to a record breaking nine, yet another single event record for the Grand Finals.

Albert Friend finished a heroic third in Micro Max despite suffering second degree burns to his right arm in an off-track incident while Daniel Minto and Jenson Chalk finished 5th and 9th respectively, Laughlin Johnstone had to battle for a 27th place finish.

Thier performance lifts them into second place on the overall Grand Finals victory list with 13, just one behind South Africa although their total of 43 podium finishes is top of the list. 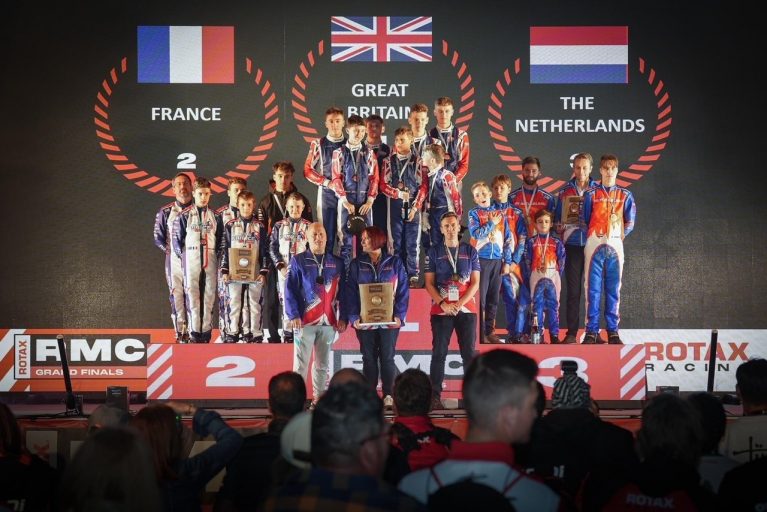 Team UK also won the Nations Cup for the first time, comfortably outscoring France and The Netherlands who completed the podium and the remaining 57 nations competing. Team UK also won the world famous Mojo Tyre Changing contest with Russ Carter beating his brother Shaun in the final with a time of 28-seconds, just one second shy of the world record for putting four tyres on rims and then taking them off again.

Watching the event live was Motorsport UK’s Karting Manager Dan Parker, who was understandably elated at the performances of so many BKC drivers.

“The results achieved by Team UK at the 2022 Rotax Grand Finals was without doubt one of the finest performances from any nation in the 23 year history of the event,” stated Parker, who joined Team UK on the podium to receive the prestigious Nations Cup trophy.

“We are massively proud of the effort and results that Team UK have achieved this week and it proves beyond doubt that the British Kart Championship is the strongest in the world,” commented J.A.G Rotax’s Gary Sheail.

“We have enjoyed tremendous support from our customers in 2022 from the biggest teams to the privateer drivers and their families who remain the backbone of our sport. To watch British drivers dominate almost every race they competed in and to break so many Grand Finals records was truly special and I am sure that the 2023 British Kart Championship will be even more competitive than ever because of this success.”